Can you believe that this week starts July? Summer seems to be flying by my eyes faster than the speed of light. Maybe it’s the 40 hour work weeks or all the blogging? Who knows, all I know is that I’m making the most of my time and this week definitely demonstrated this.

First off, I finally got to reunite with one of my best friends from college, Jen!

We got to catch up (she just came back from Disney – I’m so jealous!), talk all about the new season of Orange is the New Black, stuffed our faces at The Cheesecake Factory, and saw one of the best films ever. You’re just going to have to keep reading to see which movie it was!

After completely fan-girling and thinking nothing more exciting could happen to me on Twitter this week, it did.

After this week’s Duck Dynasty episode, Martin, one of the show’s main cast members, did #askMartin on Twitter. During this time, viewers could tweet questions at Martin and he would respond. I normally don’t participate, but thought I would give it a shot this week. Much to my surprise, he answered my question!

Follow me on Twitter to see what exciting events will happen for me this week on my favorite social media site!

Before you do that, however, check out this week’s Monday Musts!

1. The Fault in Our Stars Movie

Back in February, when The Fault in Our Stars movie trailer was released, I wrote about my excitement in that week’s Monday Musts. I finally got to see the movie! Jen and I are both TFIOS fans, so we waited til we were both free to go see the movie together. The movie lived up to what I was hoping it could be. Though it may not have been as amazing as the book (the movies never are), the movie itself was still amazing. I laughed and I cried as John Green’s novel came to life right before my eyes. Now, I don’t want to give away any plot details because everyone should see this movie. Plus, now I have the BIGGEST celeb crush on Ansel Elgort, the American-Russian actor who played Augustus.

I remember being a pre-teen and catching re-run episodes of the teen drama, Dawson’s Creek. Every time I heard the start of “I Don’t Wanna Wait,” I would glue myself to the television to watch the episode. However, since the show aired from 1998-2003, I didn’t get to see all the episodes, in order. Thanks to Netflix, I now am able to! I started the six season series, which follows Jen, Dawson, Pacey, and Joey in the New England town of Capeside. The show follows the teens as they experience love, heart break, friendship, and other trials and tribulations. Now that I finished Orange is the New Black, this is the new show I’m watching non-stop!

I don’t really get addicted to games on my phone, since I’m normally too busy tweeting, liking pictures on Instagram, or answering e-mails from one of my four accounts. However, my Facebook feed one day was loaded with people asking for help on the Guess the Emoji app. I love games that make you think like this one. So as I was guessing the answers to the questions people were asking for help on, I decided to download the free app for myself! On the app, you are given emoji images that either form a word, a phrase, or represent a word/phrase. The letters that you need are scrambled up alongside extra letters. You must then solve the puzzle to gain more points and advance to the next round!

I can’t wait for next Monday to share about my adventures of the next week with you – keep your eyes open for a post about my room that I am repainting and redecorating and more!

Hope you all had an exciting week! I had two snow days this week, which was exactly what I needed to relax! It has made my school schedule much more hectic – one of my classes I still have only had once this semester! But just like life goes, we have to adjust to the obstacles and go with it, which is exactly what I am doing!

Overall, this week had been SUPER positive. To be honest, I don’t think I have a single thing to complain about!

So let’s keep the positive energy and good vibes rolling for this week! Here’s this week’s My Monday Musts!

Yes, I know I JUST posted about eating healthy on a college budget, but hey, a girl needs a cheat meal every now and then! In every article I ever read about eating healthy, it says to allow yourself a cheat meal every once in a while not to restrict yourself. Well, ladies, I think I just found mine! My friends and I recently (and by recently I mean one of our multiple weekly trips) to Dunkin Donuts, I saw their new “cookie dough doughnut.” I’m a total sucker for cookie dough products, so I just had to try this new doughnut. When I tell you it was the best thing I have ever eaten…it was the best thing I have ever eaten! The regular doughnut has chocolate frosting and sprinkles on top, but inside it has warm, melted cookie dough! YUM!! Next time you feel like splurging, go on over to Dunkin Donuts and try their seasonal cookie dough doughnut! But hurry! It’s only out for a short amount of time!

2. “The Fault in Our Stars” Trailer

Every TFIOS fan has been freaking out since the trailer has been released – I now I have! You know I’m a huge fan based on this post. My Facebook and Twitter feeds were filled with people sharing the link to the best selling novel turned movie that will come out in the summer. “The Fault in Our Stars” is by far the best book I have ever read in my life and I honestly believe that no book will ever be able to top it. Ever. So now that it’s coming onto the big screen, any book nerd, would be freaking out about if the movie is going to not play up the how incredible the book was. Based on the trailer, I absolutely think that it will. I keep watching the trailer on repeat, even though it makes me cry every single time. The book made me bawl hysterically, so I think I will have to bring two boxes of tissues to the movies. No matter how many tears I plan on shedding, this movie is just another reason I am even more excited for summer!

Readers, I have recently received news about the greatest thing to ever, ever, ever happen to me. I am now officially a member of the Seventeen Magazine Social Club!! Yes, the Seventeen Magazine that I grew up on read as my own person Bible. As a member of the Seventeen Social Club, I will receive some awesome freebies from the company to blog about and share on my other social media sites, get access to awesome VIP events, get the inside scoop on special deals and discounts, AND have the possibility to appear in the pages of Seventeen itself! Receiving an e-mail from Seventeen, and having it signed XOXO, Your Friends at Seventeen Magazine, was the most incredible moment to ever happen to me. Of course, I received it when I was at the gym and started bawling my eyes out on the elliptical. But hey, it’s okay because my Carrie Bradshaw dreams are slowly coming true!!

By the way have you entered my giveaway yet?! Calling all sorority girls – get on it ASAP, if you have not already!! It’s for this awesome app which you can get for FREE if you win!! I’m loving it, so check it out!

Plus, check out my awesome sponsors! Head over to my sidebar and see where it says “Check out these Sparkling bloggers who are reading “Sparkle and Shine” ??? They’re some pretty awesome bloggers and are sponsoring me this month, so make sure you go and check them out!!!

This is a sponsored post. However, all opinions are my own.

The Etsy shop The Speranza Project is helping to fight cancer. What’s better than shopping and helping a good cause?!

The Speranza Project donates 20% of its sales to a different organization that fights cancer, through research, offering financial support for families, offering personal items for patients, etc.

The shop offers hand drawn mugs, ceramics, accessories, and more! Most of the products display quotes from your favorite TV shows and books. Some are for the holidays. Popular movies and books on the site include “Harry Potter,” Doctor Who,” and John Green’s novel (and soon to be movie – yay!) “The Fault in Our Stars.” I received a mug featuring a popular “The Fault in Our Stars” quote saying, “My thoughts are stars that I cannot fathom into constellations.” 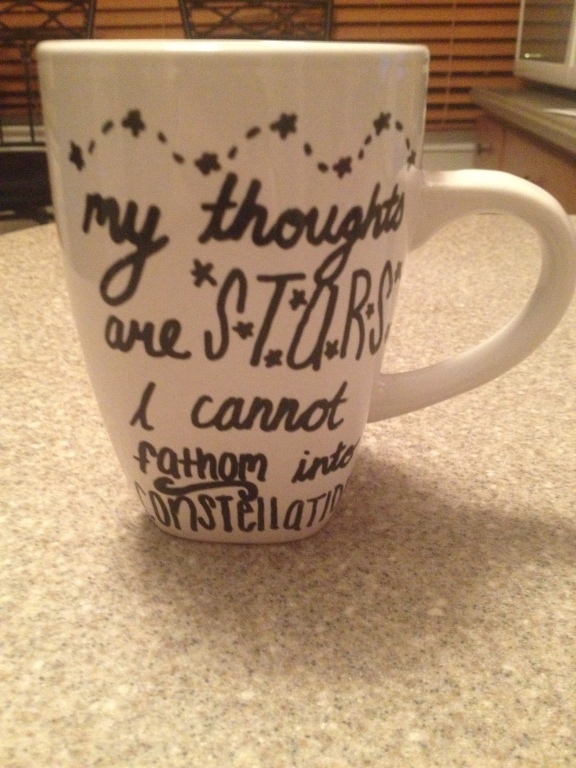 The other side of the mug featured another popular quote from the novel: 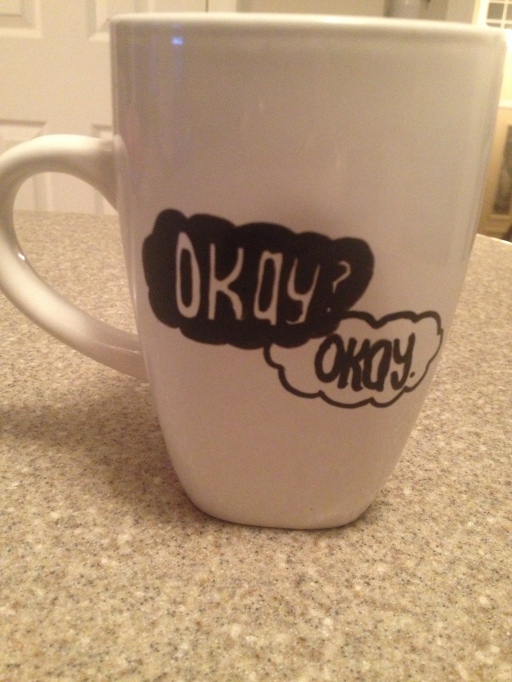 This mug is the PERFECT size! I am not a coffee drinker, but I do love hot chocolate! I cuddled up in my cheetah print snuggie, my Nook, and “The Fault in Our Stars” mug as soon as I came home from school for winter break.

As I got more engulfed in my book, the large size of the mug kept up with me as hours passed. There is nothing I find more annoying than running out of whatever you are drinking while you are all comfortable reading a great book!

The design on the mug was also very neat and professional looking. You could tell Alanna, the shop owner, had taken her time while doing this. Her patience in making it was definitely appreciated as the consumer.

For all you other book lovers out there, I recommended checking out The Speranza Project ASAP!

Clothing and other accessories are coming soon to The Speranza Project, so keep this in mind next time you are shopping. The store is definitely a place you will want to keep checking back with to help support an incredible cause!